During the Wadden Islands Bird Festival, participants of the Texel Big Day and the birdwatching excursions raised 7.517,35 Euros to help species that are seriously threatened on Texel’s beaches. So these vulnerable beach-nesting birds were the real winners of the bird festival; an initiative of the National Park Dunes of Texel and the Bird Information Centre Texel. During the weekend, a large number of birdwatchers and nature lovers enjoyed the thousands of birds and rarities that were discovered. 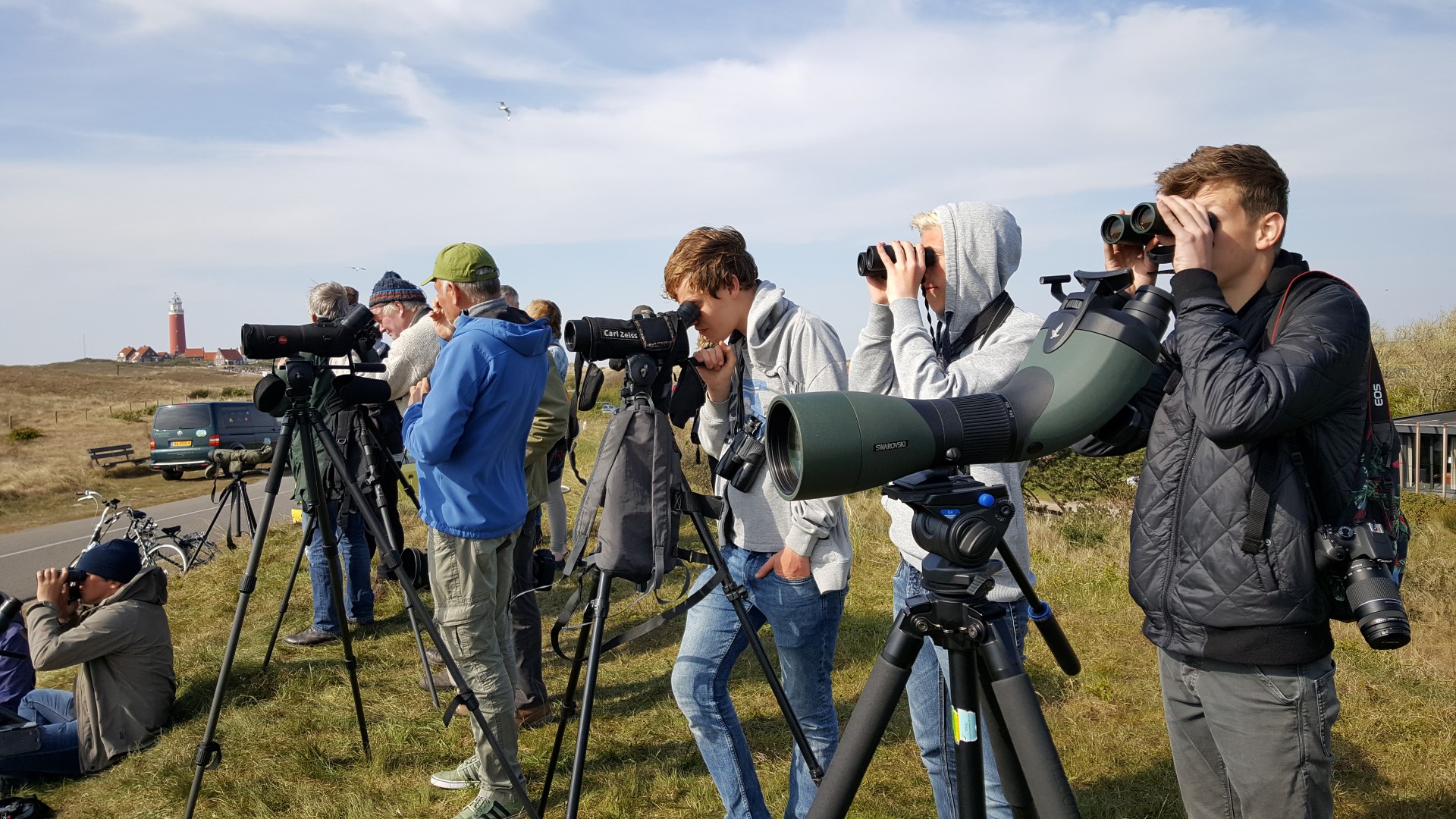 Giving our beach-nesting birds a chance
Beach-nesting species like the Little Tern, Kentish Plover and Ringed Plover are struggling on Texel’s busy beaches. The money raised through the Wadden Islands Bird Festival and the Texel Big Day will be used to information boards about beach-nesting species on parts of the beach closed for these species, this will ensure that the birds are disturbed less. “Giving the endangered Kentish Plover more of a chance,” said Han Brezet, who, as chairman, received the money on behalf of the charity Texel Bird Island. 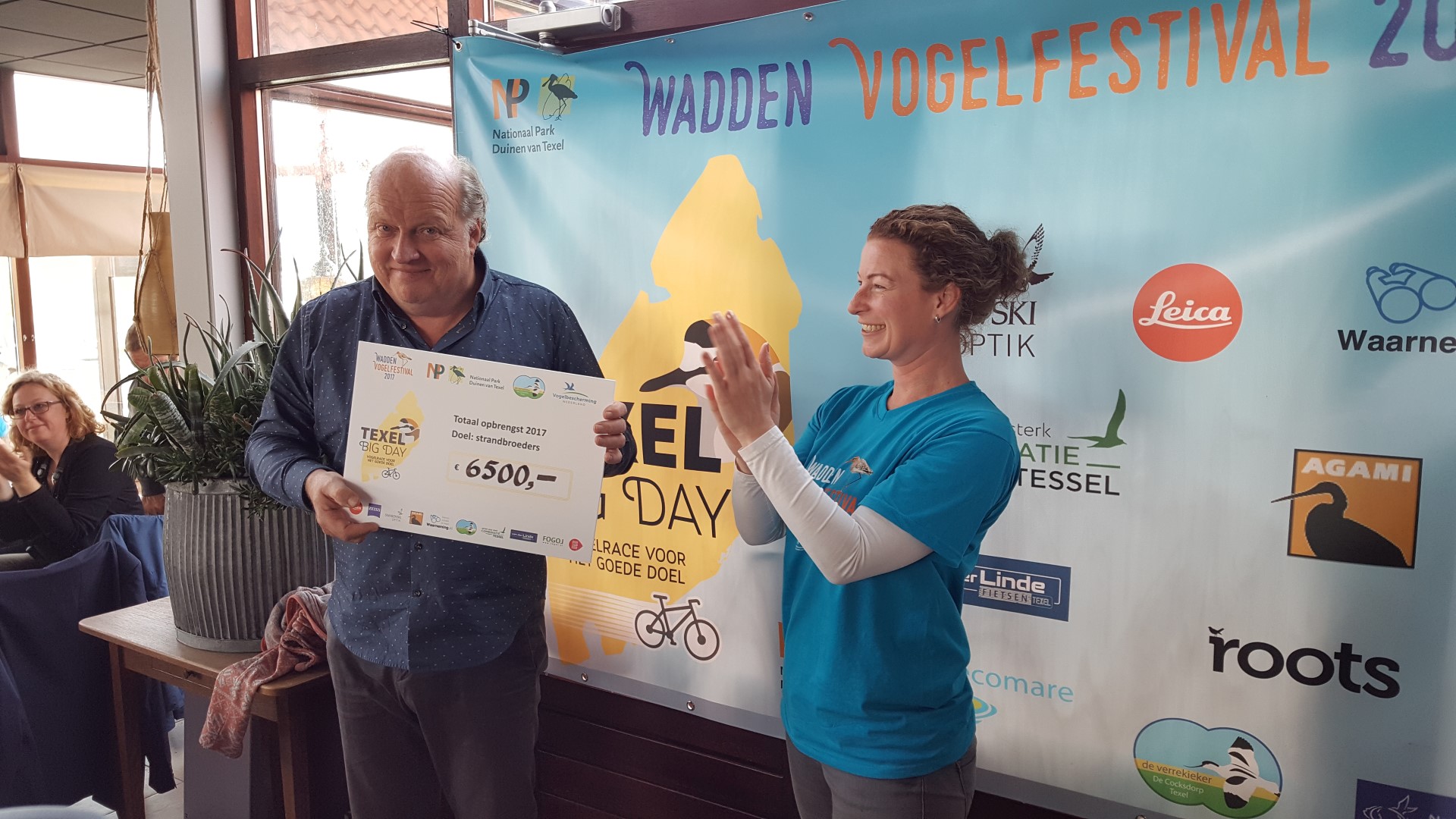 Winners of the Texel Big Day
On Saturday the 6 May 2017, Texel was the arena for eight fanatic teams, consisting of both seasoned and novice birdwatchers. Throughout the day, the teams were trying to record as many bird species as possible. Appropriately for the Texel this was done sustainability, with all teams using electric bikes (e-bikes), made available by Van der Linde cycle hire. 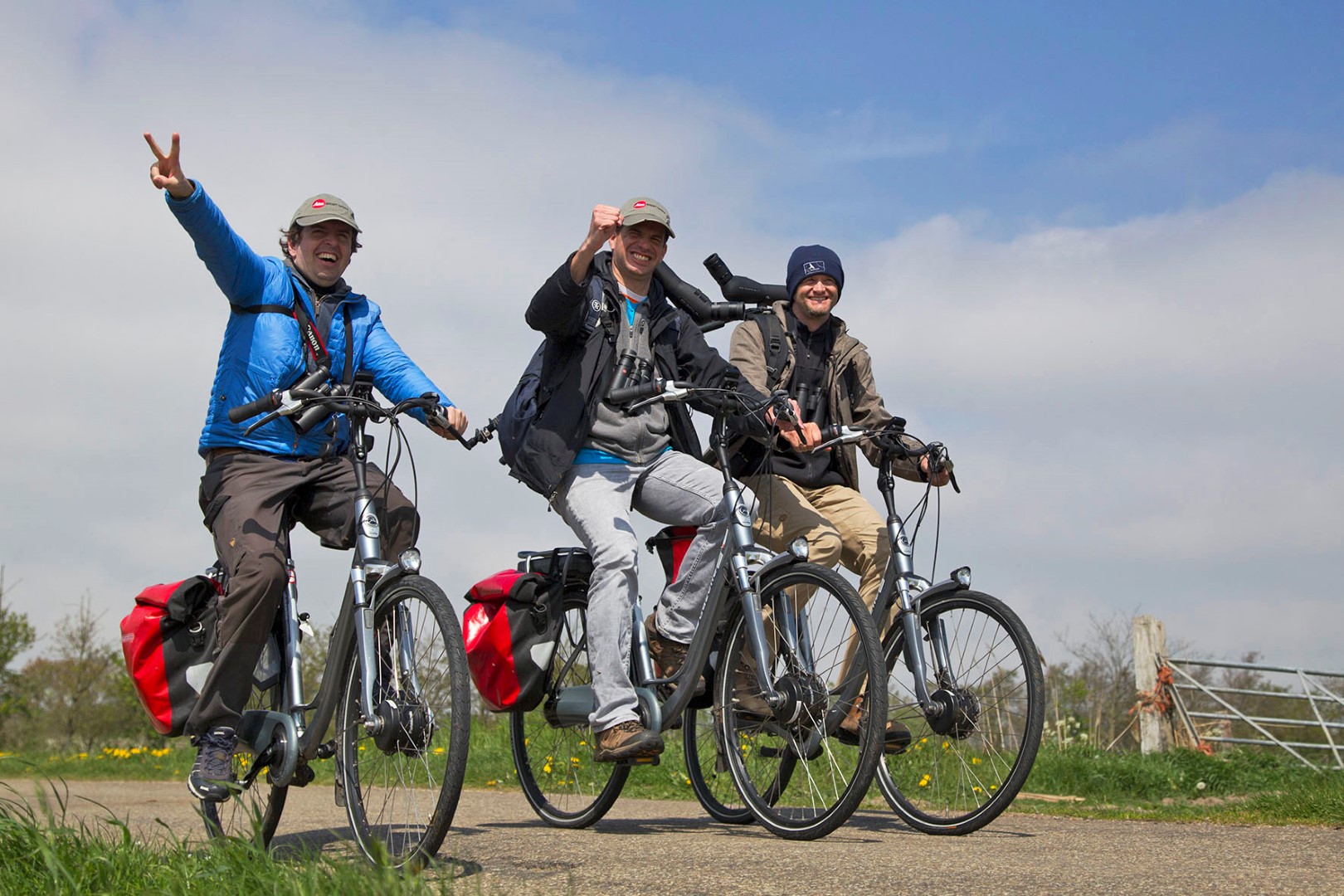 The team ‘Rock around the Clock’, consisting of Folkert Jan Hoogstra, Jeroen Breidenbach and Gijs Baller, won with a total of 149 species during the 24 hours non-stop birdwatch. 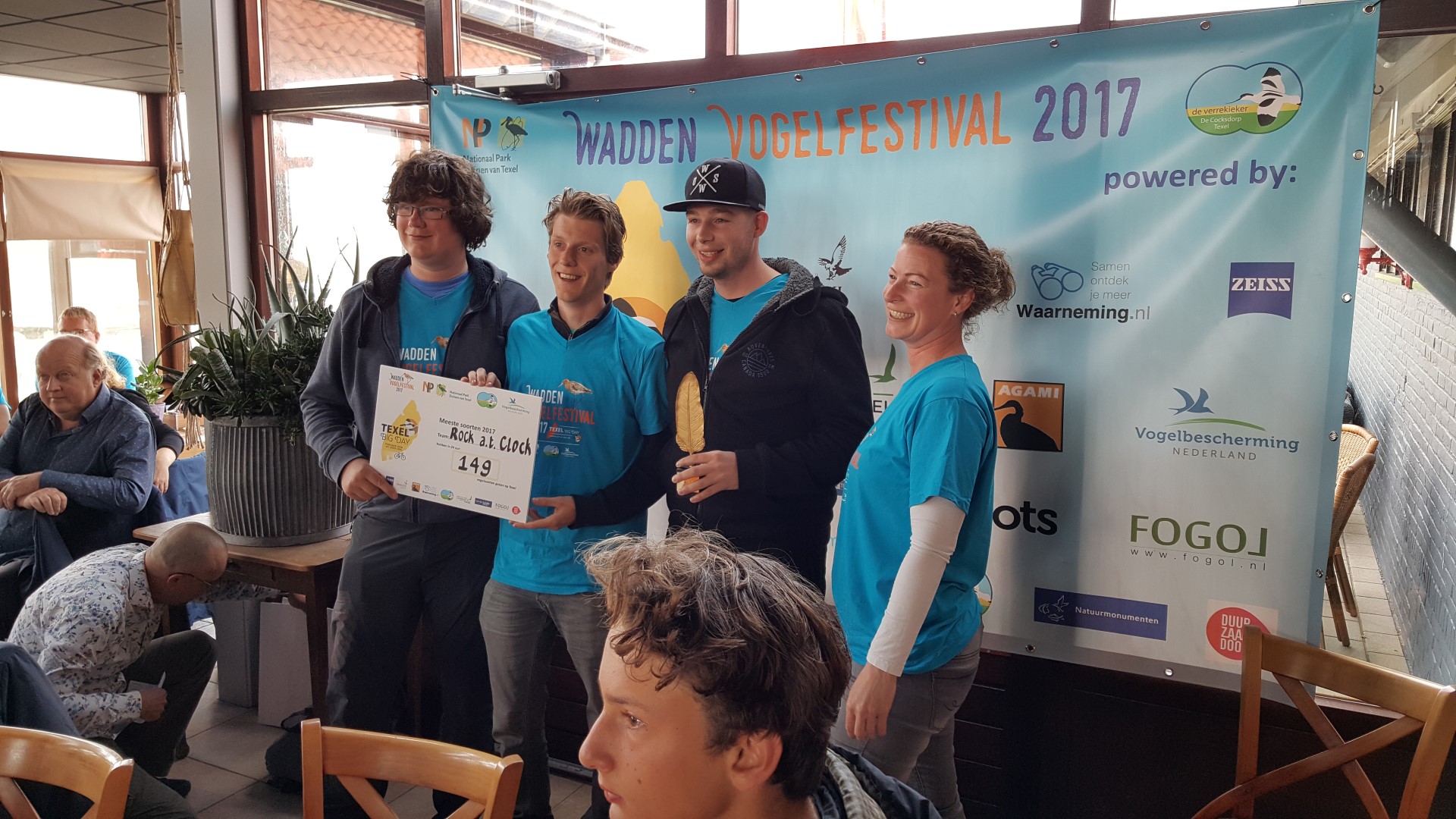 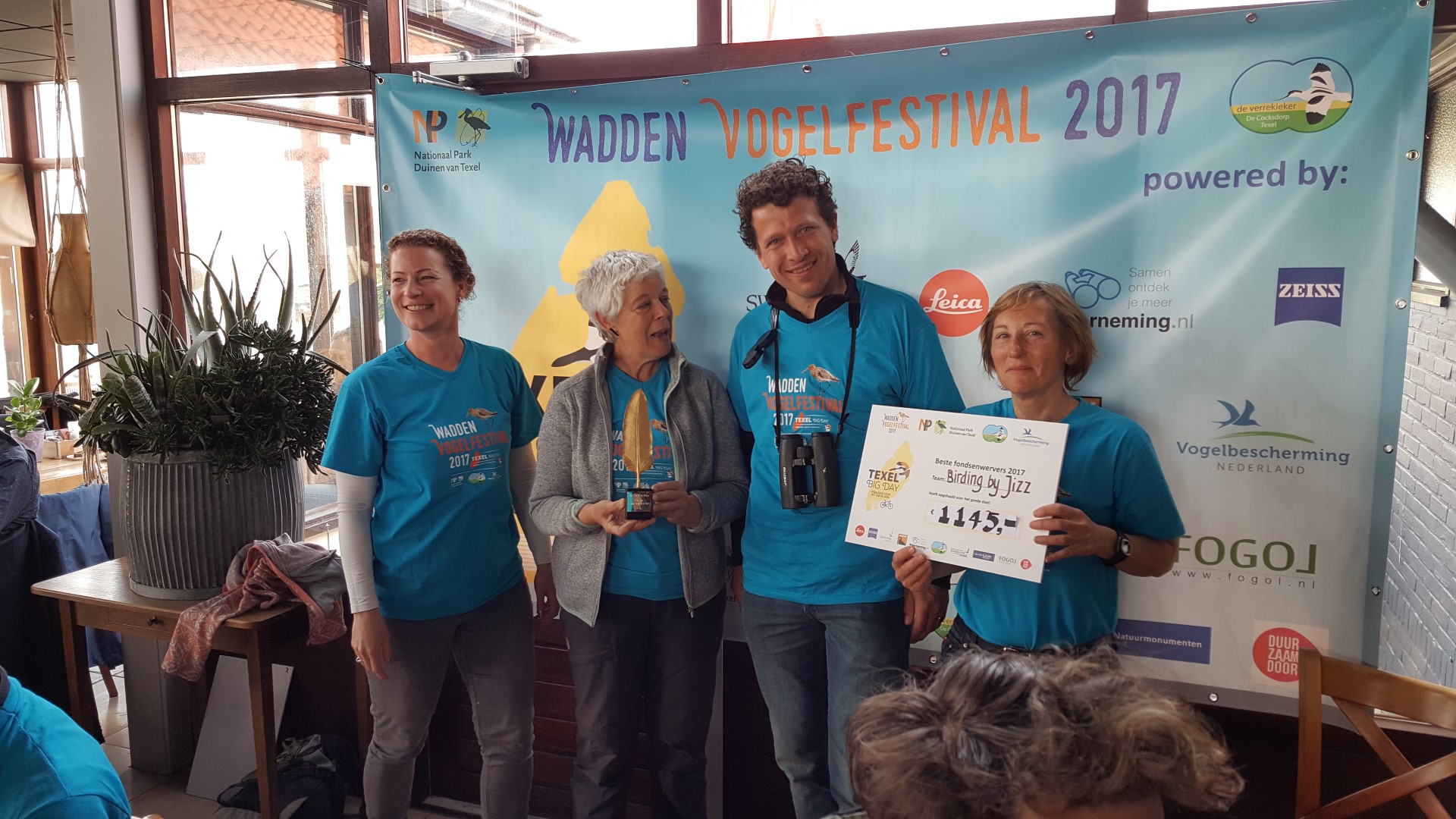 The jury had an honourable mention for the team ‘Jonge Hondjes’; four young boys from Texel who ended second in both categories. “We did not expect this,” said Koen Stork (14 yrs) from De Cocksdorp, tired but satisfied. “We saw two Ruddy Shelducks, but you really need a bit of luck. But of course we know all the short-cuts on our island. That definitely helped us. Next year we will take our revenge and go for the win.” 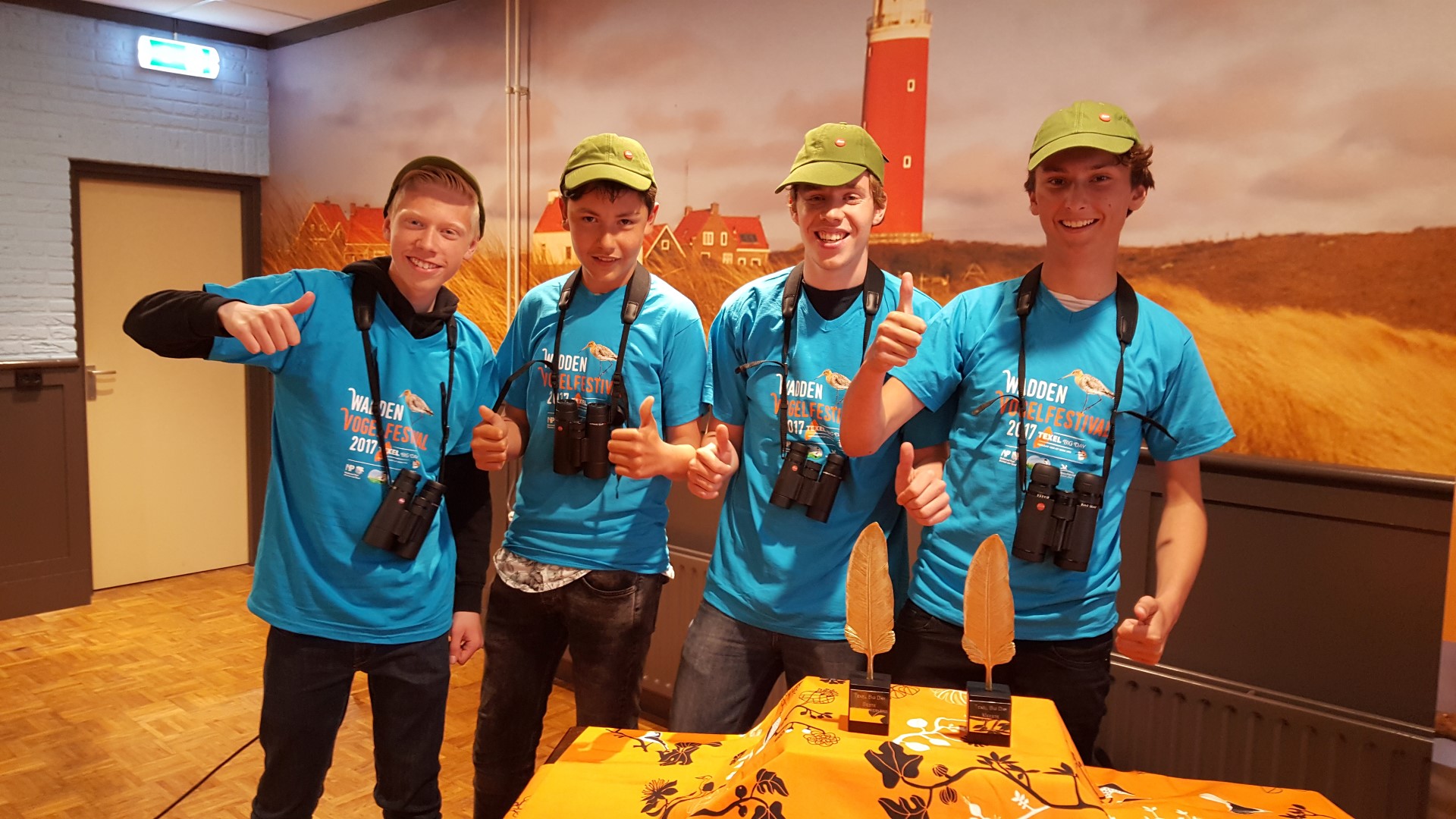 The first annual Texel Big Day was organised by the Bird Information Centre Texel and the National Park Dunes of Texel in cooperation with BirdLife Netherlands. 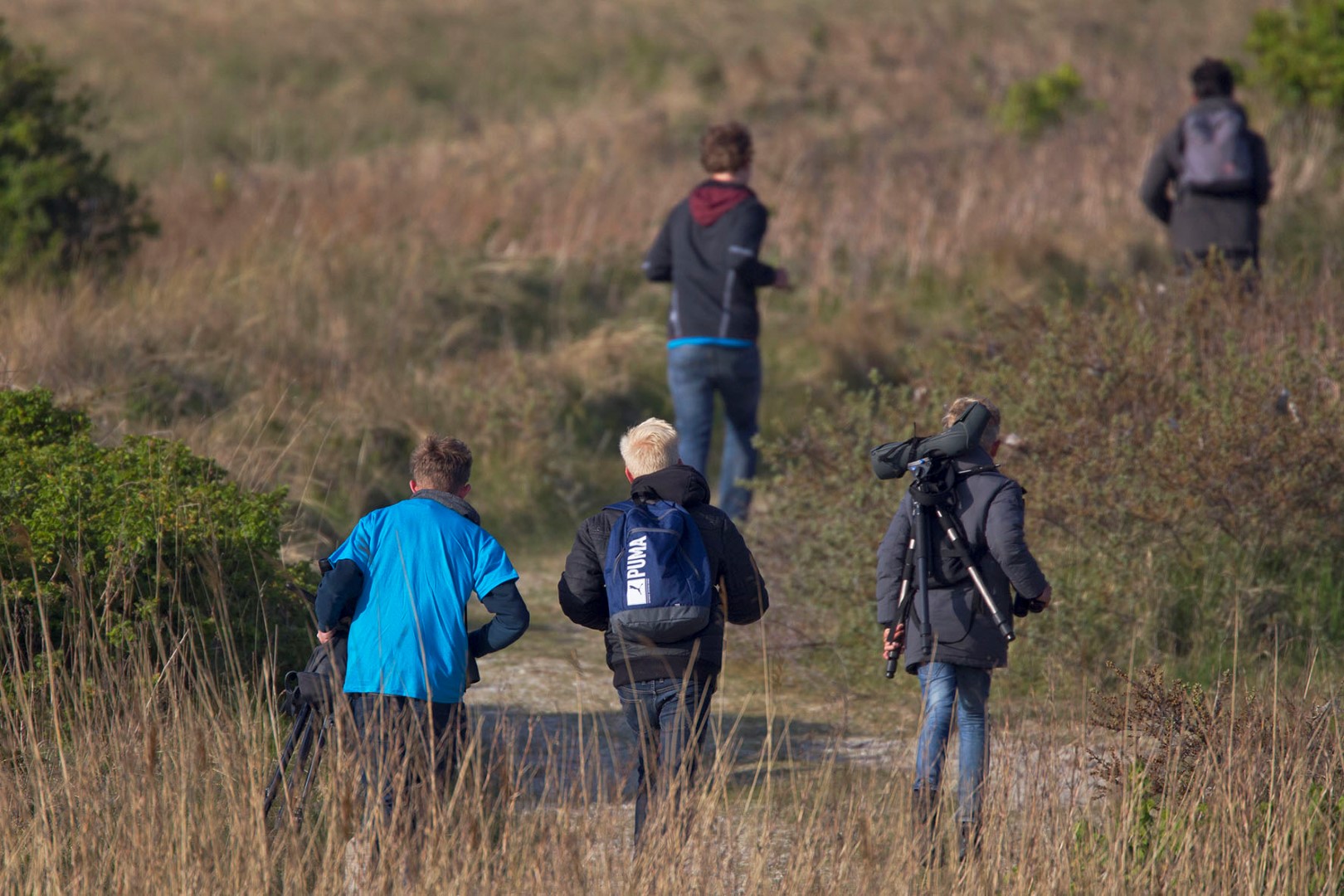 Read how the winning team experienced the first Texel Big Day (in Dutch).
View the scores of all the teams and the list of species recorded during 6 May 2017.

This second Wadden Islands Bird Festival again brought many visitors to Texel. Monica Ralling from the National Park Dunes of Texel: “Bird lovers of all ages enjoyed countless special birds through a special bird-filled route set out by the Wadden Islands Bird Festival.” Visitors mainly went to the birdwatching viewpoints in the Slufter and De Geul, the gems of the National Park Dunes of Texel. But other beautiful places of Texel, such as the ‘Bird Boulevard’ Utopia, were also well visited. 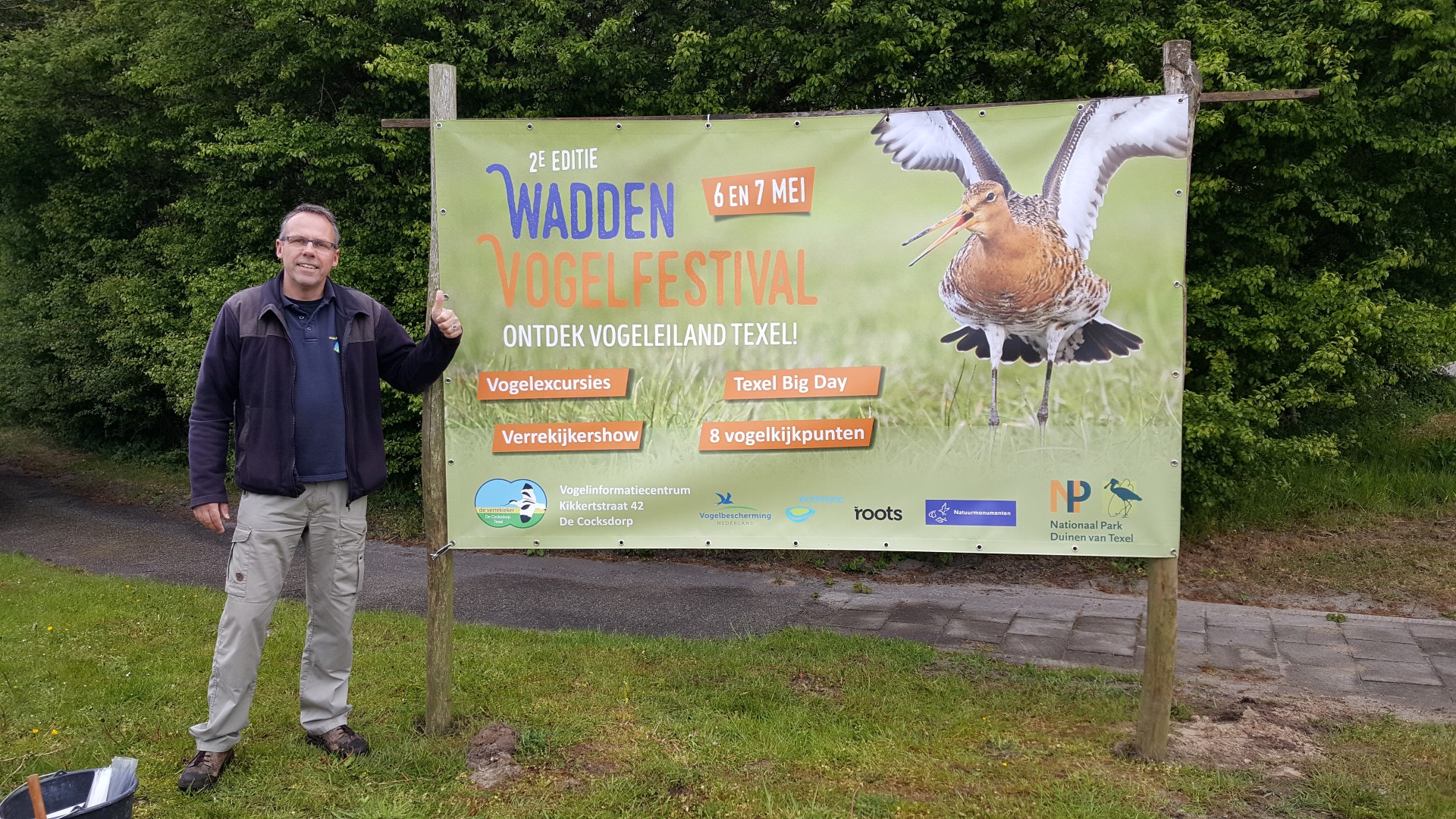 The Bird Information Centre in De Cocksdorp once again formed the nerve centre of the Wadden Islands Bird Festival, as starting point for birdwatching excursions and as host for the optics show. 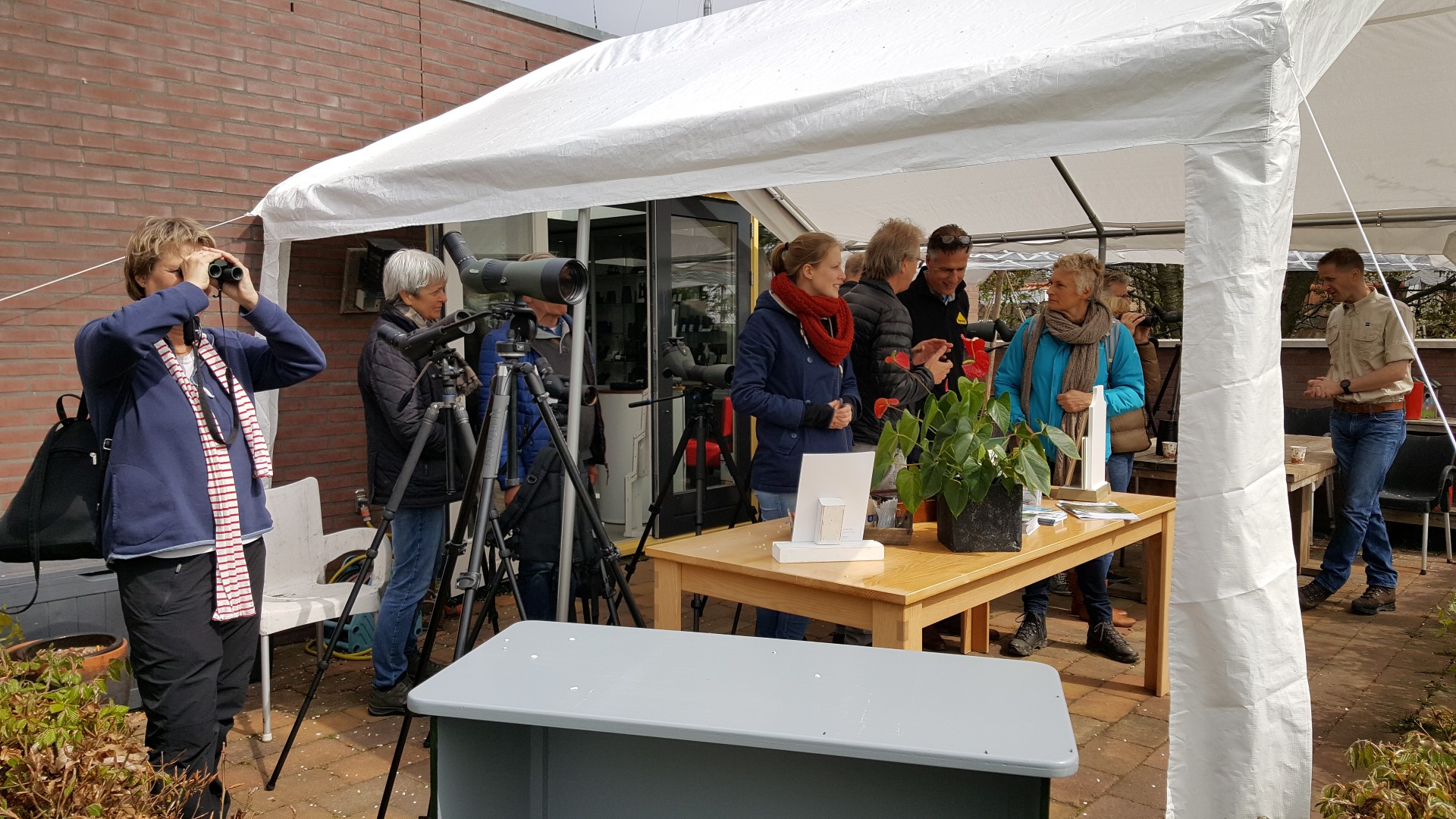 New this year on the birdwatching route was the farm Plassendaal in the Waal and Burg nature reserve. The collaboration of this farm in the polder makes it possible for visitors to see other species of birds.

Marc Plomp of the Bird Information Centre Texel looks back on a successful weekend: “It was very special to have seen the Red-rumped Swallow, Wryneck and the threatened Kentish Plover; unexpected bonuses for birdwatchers. I have seen fanatic birdwatchers really enjoying themselves, but also young and beginner birdwatchers also discovering a love for birdwatching.”

Species of the weekend
During every Wadden Islands Bird Festival, the Bird Information Centre offers a prize to the person who finds the rarest bird species on Texel during that weekend. This year, the prize was an Opticron VeranoHD 8×32 binocular worth 449 Euros (thanks to Opticron). This magnificent binocular was won by Michel Veldt for his finds of a Red-rumped Swallow and Wryneck. 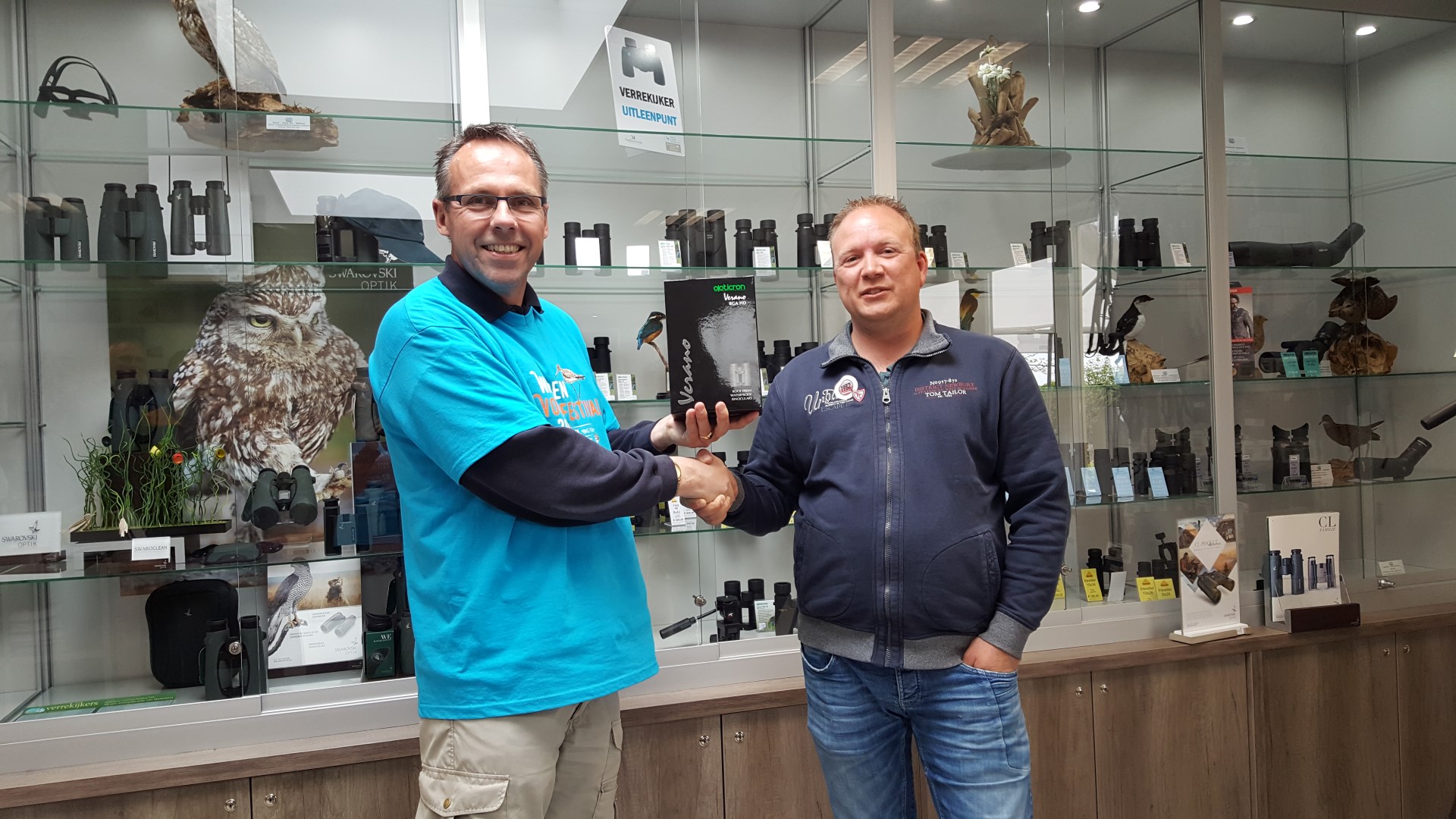 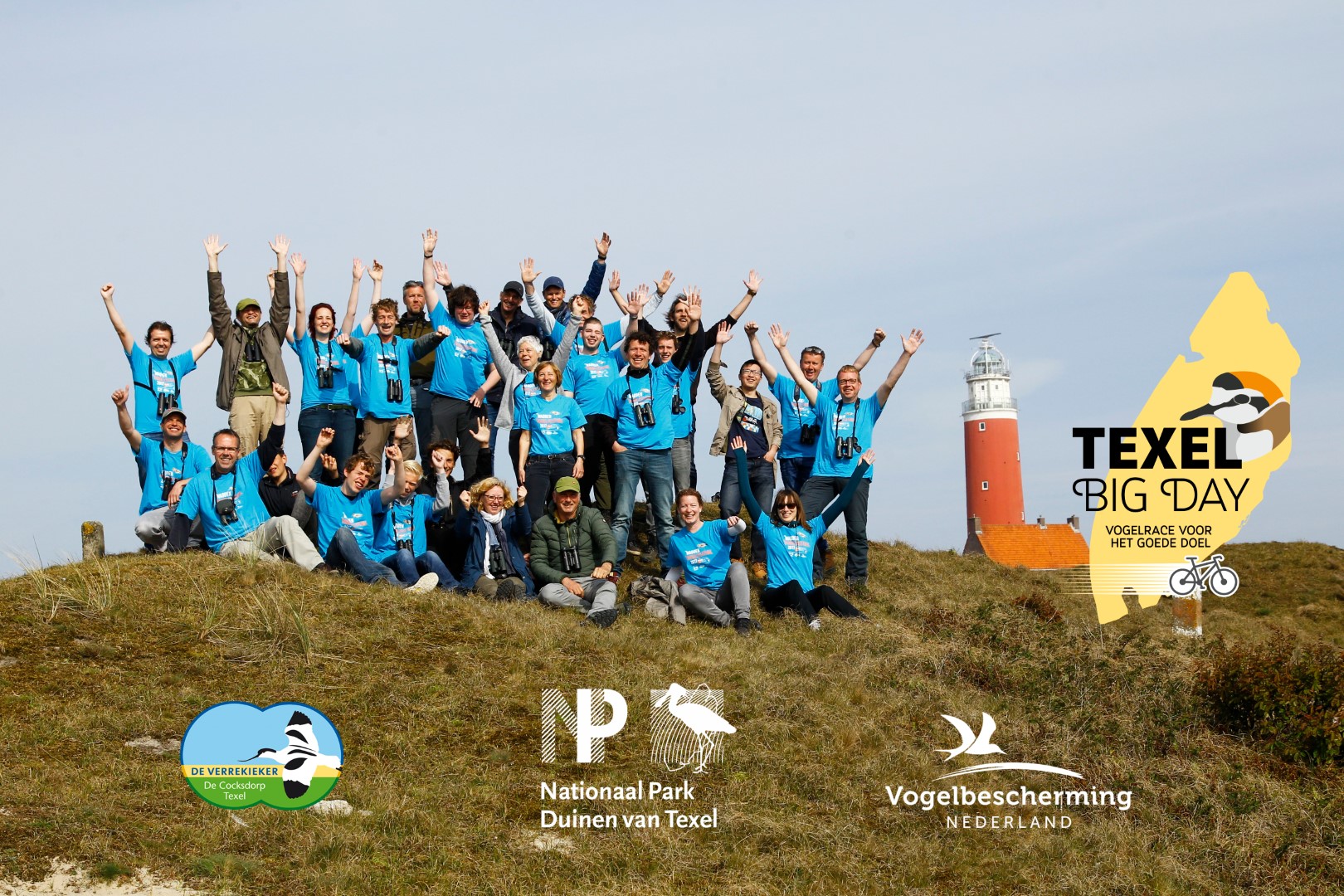